Under President Obama, DOJ’s policy was to decline prosecuting federal drug laws relating to cannabis in states that had decriminalized medicinal cannabis if that state had a robust regulatory regime in place. This decision reverses well-established policy and sets up a battle between DOJ and numerous states.

Under the Obama administration, DOJ released a memorandum titled “Guidance Regarding Marijuana Enforcement,” referred to as the “Cole Memorandum.” The Cole Memorandum considers federal enforcement efforts in the light of decriminalization of cannabis by various states.

The Department of Justice concluded that it could exercise its prosecutorial discretion on a case-by-case basis based “on its expectation that states and local governments that have enacted laws authorizing marijuana-related conduct will implement strong and effective regulatory enforcement systems that will address the threat those state laws could pose to public safety, public health, and other law enforcement interests.”

As long as the particular state program contained protections in place consistent with the several factors related to the AG’s enforcement priorities and the particular parties were complying with state law, the AG would decline to prosecute.

The Cole Memorandum identified the following factors governing the exercise of prosecutorial discretion:

• Preventing the distribution of cannabis to minors

• Preventing criminal enterprises, gangs and cartels from obtaining revenue from the sale of cannabis

• Preventing the use of cannabis on federal property

The Cole Memorandum provided some cover that allowed the development of decriminalized cannabis use in various states, including Michigan, Illinois and Ohio with other states now considering opting in.

In response to the Cole Memorandum, the Treasury Department issued its own memorandum to clarify the effect of the Cole Memorandum on financial institutions pursuant to restrictions placed on them as it related to scheduled drugs in the Bank Secrecy Act, 31 USC §§ 5311-5330. Citing prosecutorial discretion, the AG states that it will not prosecute banks using the same priorities identified in the Cole Memorandum.

The DOJ has now rescinded the Cole Memorandum, freeing federal prosecutors to pursue federal charges where they see fit. The only caveat in the DOJ memorandum is that prosecutors should follow prosecutorial principles outlined in the U.S. Attorney's Manual.

One question is whether DOJ can actually expend resources to prosecute cannabis laws. The Rohrabacher-Blumenauer Medical Marijuana Amendment prevents DOJ from using appropriated funds to interfere with states that have implemented their own laws regarding medical cannabis (passing by a margin of 242-186 in the House of Representatives). Specifically, this amendment to the Department of Justice budget appropriation provides the following:

None of the funds made available in this Act to the Department of Justice may be used, with respect to any of the States of Alabama, Alaska, Arizona, California, Colorado, Connecticut, Delaware, Florida, Georgia, Hawaii, Illinois, Iowa, Kentucky, Louisiana, Maine, Maryland, Massachusetts, Michigan, Minnesota, Mississippi, Missouri, Montana, Nevada, New Hampshire, New Jersey, New Mexico, New York, North Carolina, Oklahoma, Oregon, Rhode Island, South Carolina, Tennessee, Texas, Utah, Vermont, Virginia, Washington, and Wisconsin, or with respect to either the District of Columbia or Guam, to prevent any of them from implementing their own laws that authorize the use, distribution, possession, or cultivation of medical marijuana.

Response to DOJ’s action has been swift and not particularly positive. For example, Colorado’s Republican Senator Cory Gardner posted the following tweets: 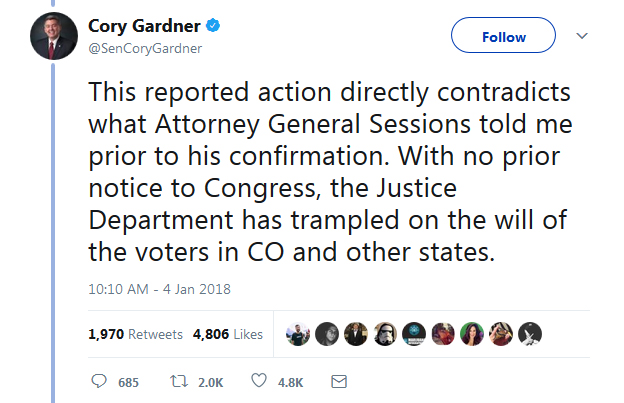 Given that recent polling shows that 64 percent of Americans favor some form of cannabis decriminalization, a policy in such contrast to the mood of the country seems ripe for significant negative response.