Can you imagine the air filled with smoke?
It was. The city was vanishing before noon
or was it earlier than that? I can't say because
the light came from nowhere and went nowhere.

In a previous blog post, I reported that the U.S. Supreme Court upheld Environmental Protection Agency regulations known as the Cross-State Air Pollution Rule or CSAPR. The EPA has now proposed updating CSAPR to better control nitrogen oxides (NOx), a main cause of ground level ozone, during “ozone season,” otherwise known as “spring” and “summer.” In Michigan, it starts 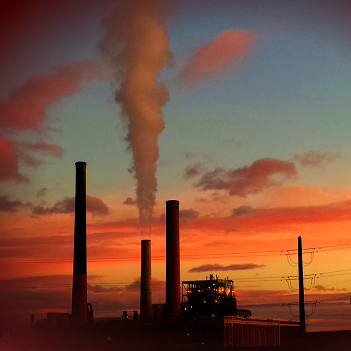 Ground-level ozone is created when NOx and other chemical compounds combine chemically. Hot, sunny days represent a perfect environment for the creation of high levels of it. Exposure to ground-level ozone causes a variety of health problems, including asthma, coughing and congestion, in addition to making existing health conditions, like bronchitis and emphysema, worse.

In the United States, weather patterns move from west to east. The prevailing winds also take with it air pollution created in western locations toward the east. As Clean Air Act regulations require individual states to meet air quality standards, eastern states may find compliance difficult to achieve due to pollution not of their own creation. By promulgating the CSAPR, the EPA intends to reduce the amount of NOx in downwind states during ozone season.

Another way to reduce NOx emissions regionally is the use of a trading system. The trading system creates allowances facilities can trade or bank to meet air standards. Facilities that are able to significantly reduce their emissions obtain allowances that they can keep for future use or sell them to those facilities that find compliance more difficult. Overall, emissions are reduced. Known as “cap and trade,” similar systems successfully reduced emissions related to acid rain and a regional NOx trading program in the Northeast.

The EPA estimated the costs of compliance will total $93 million, annually. It also calculated the net benefits to equal between $600 million to $1.1 billion annually in terms of avoiding damage related to health effects, ecosystem and property.

The state of Michigan is on the record opposing the CSAPR. The attorney general has actively participated in legal challenges to the rule up and down the federal courts. Earlier this year, Gov. Rick Snyder wrote to President Barack Obama urging reconsideration of the CSAPR, arguing that the CSAPR would make it more difficult to comply with other Clean Air Act regulations and impede economic growth.

Obviously, the administration was not swayed by those arguments. As expected, industry groups oppose the proposed rule as unnecessary and too expensive and environmental groups charge that the proposed rule is not protective enough.