— “Testify” – Rage Against the Machine

In the early days of the new administration, Congress and the executive branch worked to reverse environmental policies of the previous administration. Plans also exist to revamp environmental statutes dating back to the 1970s. Not to get all Schoolhouse Rock on you, but those efforts require more long-term strategies and a filibuster-proof Republican majority in the U.S. Senate. In the meantime, we’ll focus on more immediate efforts to change environmental regulation and specifically how that is being done.

The current administration began developing plans almost immediately to change environmental and energy-related policies and regulations. The American Bar Association Section of Environment, Energy and Resources provides a handy transition tracker that it updates regularly that allows people to follow developments in these and additional areas as they occur. 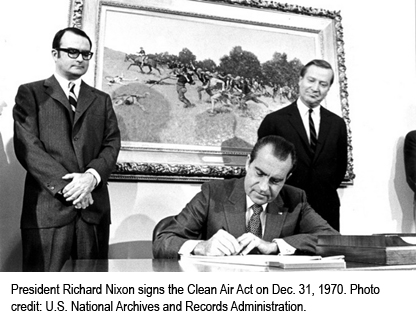 Republicans in Congress and the administration use three basic means by which to reverse previous policies and install their own vision of environmental and energy regulation and enforcement. Congress uses the Congressional Review Act to reverse regulations promulgated towards the end of the last administration, which requires only a majority vote by both houses of Congress and a presidential signature.

The Congressional Review Act (CRA) allows Congress to review administrative rules promulgated within 60 legislative days of its issuance by an administrative agency. Presently, Congress utilizes the rule to identify the previous administrations rules and may look back to rules promulgated as early as June 2016 and has until the end of May 2017 to do so. Until recently, the CRA had only successfully reversed one rule since its enactment in 1996, but the current Congress has relied on it heavily already to reverse not only environmental and energy-related regulations, but also labor and retirement plan regulations, for example.

Using this authority, Congress has already nullified rules related to hunting restrictions in National Wildlife Refuges in Alaska, land use planning and management on public lands and the Stream Protection Rule. Congress has introduced resolutions to reverse rules governing the venting of methane and flaring at oil and gas sites on federal lands and requiring risk management programs and emergency notification requirements for accidental releases of hazardous chemicals.

The CRA’s constitutionality has never been challenged, although it has been questioned. It represents an attractive alternative to using the administrative process to reverse already promulgated rules. Changing or eliminating a “legislative” rule (as opposed to an “interpretive” rule) requires an explanation of how the change is consistent with the enabling legislation, public notice and comment and essentially the same effort as promulgating a new rule – a process which could take months or even years with legal challenges.

With simply a signature, a president cannot reverse regulations. But as the executive, he has the option of directing policy through executive orders and reverse previously issued executive orders. The current administration has done just that to great effect.

One of the first executive orders was titled “Enforcing the Regulatory Reform Agenda.” That executive order established the administration’s policy of reviewing all regulations in an effort to “lower regulatory burdens on the American people by implementing and enforcing regulatory reform.” Each federal agency must establish an internal group to review all of its regulations and identify those that may inhibit economic growth, are outdated, impose costs that exceed benefits and are based on previously rescinded or modified executive orders. EPA has already undertaken actions towards meeting that executive order’s goals, including requesting public comment by May 17, 2017 of regulations that the public believes should be reviewed.

The administration also issued more specifically targeted executive orders. These include requiring the EPA and Army Corps of Engineers to review the “Waters of the United States” rule and directing all agencies to review their regulations “that potentially burden the development or use of domestically produced energy resources” and work to remove them. The latter executive order also directly negates a variety of the previous administration’s executive orders, including those that required consideration of the effects of agencies’ activities on climate change at home and abroad, climate change considerations in national security, and climate change considerations in review of environmental assessments under the National Environmental Policy Act (NEPA).

To the extent the executive orders require an agency to rescind already promulgating rules, those efforts have a significantly longer timeline. As noted above, the development of new rules to replace existing rules or the elimination of rules altogether require compliance with the Administrative Procedure Act (APA). Once an agency completes that arduous process, the rule faces judicial review, which will likely come from highly motivated environmental interest groups. Also, executive orders themselves may be found to be unconstitutional.

Although Congress controls the government’s purse strings, the administration issued a proposed budget, which clearly identifies its fiscal priorities in FY 2017 and beyond. One thing is for certain, the administration intends to significantly cut environmental and energy-related government efforts across the board. Proposed budget cuts for specific agencies include 31 percent for EPA, 12 percent for Interior and 6 percent for the Department of Energy. While Congress passed a budget leaving most of the programs intact, a look at the President’s proposed 2017 budget gives an idea how future budget proposals may look.

For example, the following programs would have faced significant reductions in 2017:

The administration plans deep cuts in its proposed 2018 budget. For example, the EPA budget is reduced by $2.6 billion, which includes the elimination of the Clean Power Plan, the Energy Star program, the Great Lakes Restoration Initiative, Chesapeake Bay restoration, and infrastructure assistance to Alaska native villages and to those on Mexican border. Facing significant reductions are the Superfund program and regulatory enforcement. The Department of Energy will lose programs like the Advanced Research Projects Agency-Energy, the Technology Loan Guarantee Program, the Advanced Technology Vehicle Manufacturing Program, the Weatherization Assistance Program and the State Energy Program.

The 2018 budget does provide for some funding increases. These include providing more money for the Department of the Interior to better develop energy and mineral production on public lands, including the relaxation of rules governing those activities. The Department of Energy will receive additional funds to restart licensing of the Yucca Mountain nuclear waste repository.

While the current administration has the support of the current Congress, its budget priorities may face more uncertainty. The 2018 budget will look different than the current budget.

The administration has clearly outlined its environmental and energy priorities. What it can do will be limited by administrative and legislative processes and political considerations. Further, to the extent that it changes existing rules or establishes new ones, those efforts must still be consistent with the enabling legislation.

It may eventually fall on the states to fill certain gaps left in areas where the federal government withdraws. We already see pushback from a large number of states. One example is that under the Clean Air Act, California has a carve out that allows it to establish more stringent requirements, so that even in the face of the administration’s efforts to retreat on CAFE standards, automakers are urging that the administration work with that state to establish workable standards. In Michigan, GOP leaders join Democratic leaders in opposing cuts to the Great Lakes Initiative.

The battle lines have been drawn, but the outcome of the battle remains very much in doubt.