Regulatory agencies have a variety of means to recover costs they incur responding to environmental contamination. Some statutes, like the Comprehensive Environmental Response, Compensation and Liability Act contain provisions allowing the recovery of costs by the government regulator.

One individual, convicted for violating laws related to the removal and disposal of asbestos, discovered that a court may order an eight-figure restitution amount to the Environmental Protection Agency (EPA) for violations of the Clean Air Act under a statute that does not specifically deal with environmental liability, the Mandatory Victim’s Restitution Act (MVRA).

On June 3, the Sixth Circuit Court of Appeals upheld a lower court’s sentencing and restitution award of $10.3 million to the EPA for response costs under the MVRA. The defendant was one of five members of a salvaging company that demolished a former 300-acre industrial facility and recovered salvageable materials (essentially metals) for resale. The former industrial site had significant amounts of asbestos throughout the facility, which needed to be removed and disposed.

Under the Clean Air Act (CAA), airborne asbestos fibers are considered “hazardous air pollutants.” The EPA developed standards for handling of asbestos to prevent the release of asbestos fibers under the National Emission Standards for Hazardous Air Pollutants. According to the trial court, during demolition activities, the five individuals violated the EPA’s asbestos NESHAP standards in a variety of ways, which resulted in the contamination of the entire 300-acre property with asbe 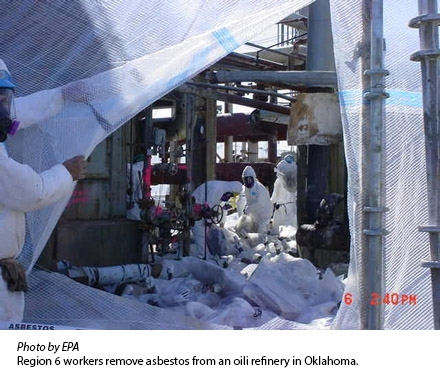 The demolition company initially agreed to respond to the release of asbestos and comply with NESHAP standards moving forward under the terms of a consent decree. Eventually, the EPA ordered them to stop work and proceeded to clean up the asbestos on the property itself. The EPA incurred $16.2 million in cleanup costs.

A grand jury indicted the five members of the demolition company for violations of the NESHAP and the CAA. The defendant in this suit pleaded guilty to one count of conspiracy to violate the CAA. The trial court sentenced the defendant to 60 months in prison.

The EPA exercised its right under CERCLA to undertake cleanup of the property and incurred costs doing so. But, the EPA declined to file a civil suit under CERCLA to recover response costs. Instead, it chose to seek mandatory restitution under the MVRA from the court at sentencing. The trial court eventually awarded to the EPA $10.3 million against all defendants, jointly and severally.

The MVRA may seem like an unusual basis for a federal environmental agency to recover response costs it incurred under CERCLA. The MVRA amended the Victim and Witness Protection Act, which provides that a court during sentencing may order restitution to a victim for losses related to the offense under which the defendant was sentenced. The MVRA expanded the concept of restitution by making the award of restitution mandatory for certain offenses, including one “in which an identifiable victim or victims has suffered a physical injury or pecuniary loss.” It applies to any “offense against property.”

The defendant challenged the restitution award on a variety of grounds, but the one on which we will focus is the claim that the EPA could not avail itself of the MVRA to recover its cleanup costs. He argued that since the EPA did not own the property at issue, it could not be a “victim” of the “offense against property” for which restitution was being sought.

The appellate court rejected that argument, finding that there is no requirement under the MVRA that the victim own the property in question. As contamination of property is an offense against property, the government’s costs in cleaning up the contamination were reimbursable.

In support, the appellate court referenced a variety of instances in which the government could recover the costs of responding to damages resulting from a violation of environmental laws under the MVRA, including cleaning up sediments and mine tailings resulting from a violation of the Clean Water Act and cleaning up impacts of illegal discharges of petroleum-impacted wastewater under the Safe Drinking Water Act and the Resource Conservation and Recovery Act.

The defendant also stated that as the EPA had an alternative means to recover its responses costs (here, CERCLA cost recovery), the trial court abused its discretion by ordering restitution under the MVRA. However, the defendant was unable to identify any legal basis or precedent that required the government seek recovery under a civil case, rather than restitution. The EPA had the option of selecting the means by which it would recover its costs.

If the EPA could not avail itself of the MVRA, it would have had to file a separate action for cost recovery under CERCLA with additional and likely repetitive proofs. By seeking restitution in the criminal action, the EPA avoided jumping through several procedural hoops, resulting in likely additional costs and expenses to receive an award for the costs it incurred.

In the context of damage that results from criminal violations of environmental laws and ultimate convictions or pleas, the MVRA allows the EPA, other government agencies and even third parties that may have been harmed as a result a means to seek restitution for their damages, either personal or monetary.

There are requirements for obtaining that relief, including providing proof that one is entitled to restitution (i.e., victimhood) and a factual demonstration of evidence as to the amount of restitution to which a party is entitled. But, one may avoid other procedural and proof issues that may exist in cost recovery claims under environmental statutes where they exist or for those environmental statutes that have no separate provision for the recovery of damages, but provide for criminal sanctions.