On June 21, 2016, the governors of eight Great Lakes states unanimously voted to allow an out-of-basin diversion of Great Lakes waters to Waukesha, Wis. Under the terms of the Great Lakes-St. Lawrence River Basin Water Resources Compact (Great Lakes Compact), out-of-basin diversions require a unanimous decision by the governors. Opponents to the diversion have roundly criticized this decision, but, in fact, the decision and the process that led to it represent a logical conclusion, based on scientific evidence that will act as a strong precedent in favor of protecting the Great 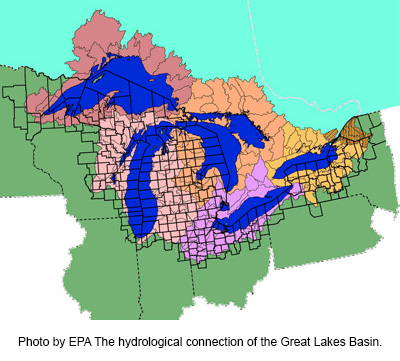 The Great Lakes Compact is an agreement by the eight Great Lakes states that provides for the protection of the waters within the Great Lakes and St. Lawrence River Basin (basin), which was approved by Congress and signed into law by President George W. Bush. It prevents most diversions of water to areas outside the Basin, but requires that the states within the basin enact protections from consumption, overuse and water quality. Diversion of Great Lakes water is a very serious issue because while they represent 20 percent of fresh surface water in the world, those waters are glacial and only 1 percent of the Great Lakes water is renewed on an annual basis.

The Great Lakes Compact allows out-of-basin diversions in limited circumstances. The city of Waukesha, Wis., submitted an application to divert 10.1 million gallons of water per day from Lake Michigan. While located in a Wisconsin county that is partly within the Basin, Waukesha is actually outside the basin. Waukesha obtains its drinking water from aquifers beneath it, but that source contained levels of a contaminant, radium, that exceeded legal standards. As result, it had to decide how best to remedy the situation. Hydrogeological data demonstrated that the deep aquifer water was actually connected to the Lake Michigan watershed.

While Waukesha considered treating the contaminated groundwater, it determined its best option is to bring water from the Lake Michigan to supply its drinking water. Under the terms of the Great Lakes Compact, Waukesha’s county represents a “straddling county.” The Great Lakes Compact contains a process that allows diversions to a community within a straddling county. All of the following conditions must be met to allow a diversion: water to be used solely for public water supply purposes; the diversion maximizes the return of waters to the basin; the diversion shall be managed and regulated; a finding that there is no reasonable water supply alternative, including conservation measures; a showing that the integrity of the basin ecosystem will not be endangered; the project undergoes a review; and there is unanimous support for the diversion.

The proposed diversion received significant public opposition. One group argued that the diversion was predominantly for economic development and would exacerbate sprawl and segregation in the area. The bases for other objections included claims that Waukesha inflated the amount of water that it needed, that Waukesha could more cheaply use lower aquifers and treat the deeper, contaminated aquifer, and the return flow to Lake Michigan would be contaminated.

On May 18, the “Regional Body” conducting the review of the application issued its finding in support of the application. The Regional Body looked at the criteria for diversions and found that Waukesha was a community in a straddling county, the water would be used as a public water supply, Waukesha did not have an adequate water supply because the radium in the deep aquifer made it unusable as a water supply, Waukesha had no reasonable water supply alternative, Waukesha could not avoid the diversion through water conservation and efficiency measures and 100 percent of the diverted water would be returned to Lake Michigan, thus resulting in a net positive contribution to the Great Lakes. The Regional Body did not approve the 10.1 million gallons per day Waukesha wanted, but accepted a diversion of 8.2 million gallons per day.

The approval came with strings attached. Waukesha was required to continue implementing and enforcing its water conservation and efficiency programs, which must be updated every 10 years. The deeper aquifer water could be used only on an emergency basis. There could be no approvals from groundwater use that would negate the benefit of increasing the amount of groundwater returned to Lake Michigan. There must be annual reporting on the amounts of water diverted. In essence, there is strict oversight of the diversion while it continues.

So, what kind of precedence does this decision set? First, the diversion was one that is allowed by the very limited exceptions to out-of-basin diversions anticipated by the Great Lakes Compact. Next, because the aquifer from which Waukesha obtained its groundwater was connected hydrogeologically to Lake Michigan and discharged into the Mississippi River basin after use, the Great Lakes would now obtain the benefit of that previously diverted discharge. Finally, the diversion itself is subject to reporting and oversight to confirm the bases for the approval remains unabated.

On its face, a diversion of Great Lakes water to an area outside of the basin strikes a discordant chord. But, upon further reflection, fears that this diversion would lead to demands for water by those farther away from the Great Lakes are unfounded. The Great Lakes Compact worked as designed. But those who value, live near and rely upon the Great Lakes should remain vigilant, as many thirsty eyes often stray to the important resource. If the goal of the Great Lakes Compact is no net loss of water to outside the basin, then approving only those projects that can scientifically demonstrate no net loss (or in this case, net gain) is a step in the right direction.