Those of us old enough to remember the late 1960s and early '70s are quite familiar with the eutrophication of Lake Erie, which led many to describe the lake as the “Dead Sea of 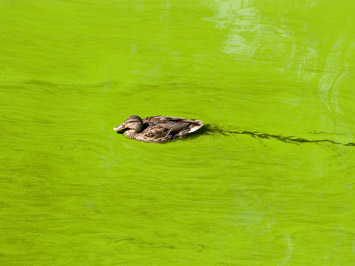 North America.” Great Lakes states enacted significant legislation banning the use of phosphorus in detergents and fertilizers, focusing on residential uses. Yet, several decades later, we are facing the same issues.

Toxic algae bloomed in Lake Erie in huge numbers in August 2014, causing the city of Toledo to issue a “do not drink” advisory. Fears that this was only the beginning of similar occurrences were realized this summer, when the 2015 algal bloom was worse, closing beaches and threatening water supplies. According to the National Oceanic and Atmospheric Administration, the blooms are created by wet springs that cause fertilizer to run off in great amounts followed by warm temperatures.

“We're at a point now where the algae and green water (are) causing some people to sell their boats and others don't want to go out in wave runners,” Oregon (Ohio) City Council member (and western Lake Erie waterkeeper) Sandy Bihn told the Toledo-area publication The Press. “It's putrid. It's caused Toledo to pay more in its water treatment costs, walleye numbers to decrease substantially, and a decrease in yellow perch.”

Fearing another serious public health issue, the states of Michigan and Ohio, along with Ontario, signed the Western Basin of Lake Erie Collaborative Agreement, which sets a goal of 30 percent reduction of phosphorus entering into Lake Erie by 2025. Although the agreement establishes a goal, its success will depend on what the participating jurisdictions do to reduce effluent containing the stuff that algae loves to eat.

For its part, Michigan issued a draft of an Implementation Plan in October. Its focus is on the Detroit River, the River Raisin and the state’s portion of the Maumee River basin. Actions proposed by the state include:

• Maintaining the reductions in phosphorus discharges from the largest point source discharge into Lake Erie, the Detroit Water and Sewerage Department.

• Developing a watershed management plan for the Maumee River basin, while working closely with Indiana and Ohio.

• Monitoring and studying the causes of harmful algal blooms because (according to the Michigan Department of Environmental Quality) they are “not well understood.”

• Determining how much responsibility for harmful algal blooms is related to invasive mussels.

• Identifying how to reduce River Raisin phosphorus reductions, including an evaluation of the Monroe Wastewater Treatment Facility.

It seems a bit disingenuous to state that the causes of algal bloom are not well understood, as a wealth of study has been developed since the 1970s. Also, there is no specific discussion of the contribution of concentrated animal feeding operations to algal blooms, although the draft plan does discuss the existence of CAFOs and other potential agricultural nonpoint sources in the Maumee River basin.

Neither the collaborative agreement nor the draft plan mentions the effect of discharges of, and the need to control, effluents containing nitrogen, a contaminant understood to contribute to algal blooms. As with the control of phosphorus in the 1970s, the focus of the draft plan is on discharges related to residential uses and not as much on uncontrolled agricultural runoff.

The draft plan is just that, a draft. The public comment period for the draft plan remains open until Dec. 7, and a public hearing on the draft plan will occur Dec. 1  6-9 p.m. at the Monroe Middle School auditorium. Written comments can be sent via email to Laura Smith at smithl16@michigan.gov or by mail to the DEQ, P.O. Box 30458, Lansing, MI 48909-7958.