Your resource for regulatory and legal updates
Renewable Energy Poised to Thrive Under any White House
12.07.2016

“I’d put my money on the sun and solar energy. What a source of power! I hope
we don’t have to wait until oil and coal run out before we tackle that.”

“There has been a big push to develop alternative forms of energy —
so-called green energy — from renewable sources. That's a big mistake.”

In the early days of the renewable energy industry, its resiliency was predicated upon which party held the reins of power. In the late 1970s, President Jimmy Carter and Congress for the most part supported renewable energy, passing legislation intended to promote and incentivize it. President Reagan thought less of it and removed the incentives while tearing down solar panels built on the White House just two years prior. The industry ebbed and flowed as the Republican and Democratic parties jockeyed for political power. This time, it’s different. 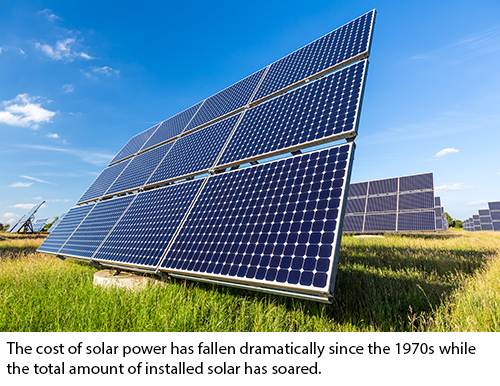 In the quote above from his book, Crippled America, President-elect Trump indicated that he prefers traditional fossil fuels to alternative forms of energy, even while Thomas Edison foreshadowed the renewable energy market currently in place. Early signs indicate that Trump intends to follow through on his preference.

Renewable energy was once seen as being an extremely expensive way to create energy. In its early days, legislatures provided subsidies for its development in large part as a step toward energy independence. That in turn created demand and with demand came the benefits of economies of scale.

Decades of development have given way to a point where renewable energy sources can now compete, even without subsidies, with traditional forms of energy. The policy to promote the development of renewables, in essence, was and is a success.

So, how cheap are renewable sources, now? Fortune reported that while costs of generating electricity from gas and coal have risen, the price of power from wind and solar has been falling.

According to Bloomberg, "Government subsidies have helped wind and solar get a foothold in global power markets, but economies of scale are the true driver of falling prices: The cost of solar power has fallen to 1/150th of its level in the 1970s, while the total amount of installed solar has soared 115,000-fold."

With new technological developments and greater demand, renewable energy costs will only continue to go down, which creates an economic incentive for the use of these technologies. This holds true even in places where coal is cheap and plentiful, like Texas. In Michigan, coal-fired plants are closing, mainly because they have outlived their useful lives and are expensive to run. They are not being replaced by other coal plants but by natural gas and renewables. The economic case for renewables will keep the market for it healthy and vibrant no matter what the new administration does.

Plans are already set and more is on the way

Most major corporations has developed sustainability policies that include the development of alternative energy. Many of these corporations are multinational and any reduction in enthusiasm for renewable energy in the United States will be offset by voluntary and required carbon reduction efforts in the countries in which they operate.

Many of the renewable energy projects are either already built or planning is underway. These projects have long lead times and require the development of significant infrastructure and agreements that cannot be reversed easily or quickly. For example, the Block Island Wind Farm off the coast of Rhode Island will begin operations soon, creating enough energy to power 17,000 homes. The Bureau of Land Management has 9,763 megawatts of solar energy, 4,767 megawatts of wind energy, and 605 megawatts of geothermal energy developing on federal lands since 2009. Iowa utilities are spending $4.6 billion to develop 2,500 megawatts of new wind for the next four years. There are many more examples of renewable energy projects in place or nearing development.

States are finding that desirable corporations (and the jobs they bring) identify the availability of renewable energy as a factor in deciding where to locate. Companies like Google, Apple, and, (now) in Michigan, Switch, will only locate where they can get their energy from renewable sources. While the new administration may chafe at renewable energy, local governments, states and corporations are already heading quickly toward decarbonizing their operations to attract these businesses.

Republicans are openly working toward promoting renewable energy and getting their party to embrace clean energy. The Michigan Conservative Energy Forum works towards the adoption of new energy technologies and energy efficiency as a core conservative principle. The Green Tea Party is a grassroots organization that promotes renewable energy and efficiency, too. These organizations and their members are part of the new administration’s supporters who will have a say in future policy.

Rural farm owners, a traditional Republican block, are now counting on the profits generated by wind farms to keep their farms viable. While Florida voters were voting for Donald Trump, they also rejected a utility-backed measure that would have made it more difficult to install solar power for individuals. Republicans in South Carolina are pushing for legislation to support renewable energy in that state. Support for renewable energy is no longer strictly a left-right issue.