“Why do they bother saying ‘raw sewage’? Do some people actually cook that stuff?”

In January, the U.S. Environmental Protection Agency proposed a new rule that would establish notification requirements for an operator of a combined sewer system (CSS) that experience combined sewer overflows (CSO) into the Great Lakes Basin. The proposed rule seeks to protect public health by requiring signage at areas of CSO events, notification of local public health authorities and other potentially impacted governments or native tribes, public notice of CSO events and publicly available annual reporting of CSO events. The new administration stayed the proposed rule while it reviews all pending rules, so its ultimate fate is yet to be decided.

Unlike municipal separate sewer systems that have separate conduits for domestic sewage and storm water, CSS systems combine sanitary wastes and stormwater into a single system. During certain wet weather events, publicly owned treatment works that treat and discharge treated wastewater into public waters become overwhelmed by the combined sewage and release untreated wastes directly into receiving waters. As a result, raw sewage ends up into streams, rivers and lakes in which people swim and fish and obtain drinking water, causing a potential health hazard.

Michigan possesses 42 of the 184 National Pollution Discharge Elimination System permits related to municipal CSSs in the Great Lakes Basin. (An NPDES permit defines the operating parameters of a specific point source to a 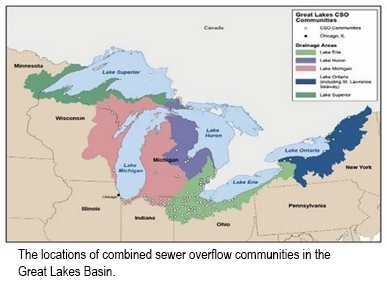 In 1994, EPA issued its CSO control policy that established “nine minimum controls” designed to establish cost-effective controls for CSS systems, including notification to the public of the CSO events and their potential impacts. The proposed rule incorporates new technologies that allow for easier public notice and identifies how permit holders can comply with the public notice requirements of the CSO control policy and the Clean Water Act.

Michigan has considered the impact of and responses to CSO events. Currently, Michigan regulations require the following for CSO events: notify MDEQ, local health departments, a daily newspaper within 24 hours of the discharge; provide notice to MDEQ at the conclusion of the CSO event; provide information related to the volume and quality of what was discharged, the reason for the discharge, the identity of the receiving water and what waters were affected, time and date of the start and conclusion of the event; the compliance status of the source; and test the waters for E. coli, if necessary. MDEQ lists CSO events on its website, maintains a list of such events and prepares an annual report.

The proposed rule greatly expands the requirements for public notice. The new and expanded reporting obligations include the following requirements:

• Signage: Signs must be placed at CSO outfalls that must have at the minimum the name of the CSO operator, a description of the discharge, notice that the water may contain sewage and contact information for the permit holder.

• Initial and Supplemental Notice to Public Health Departments and Other Affected Entities: Within four hours of the event, notice must be provided to local public health departments, any potentially affected public entity and native tribes. The information must contain the location of the discharge, the location and description of any public access area, the dates and times of the discharges, whether the discharge has concluded and a contact for the permit holder. The permit holder must supplement this information to include the total volume released within 24 hours of the conclusion of the event

• Initial and Supplemental Notice to the Public: The permit holder must provide information in a manner that will alert the public as soon as possible, utilizing a variety of means, including texts, email and social media. EPA is seeking comment whether it should require the use of  broadcast media.

• Annual CSO Notice: All states within the Great Lakes Basin should make an annual report on CSO events within their jurisdictions by May 1 of the following year.

• Public Notification Plans: These plans will ultimately become a part of a permittee’s NPDES permit. The plans are system specific and will describe how the permit holder will comply with its obligations to provide the requisite public notice. This requirement must be completed by Dec. 18 if the rule takes effect.

Many of us remember the mess after the August 2014 historic rain event in Southeast Michigan. A warming climate will likely mean that severe rain events will become more common, creating even more CSO events. If the proposed rule passes muster, those communities with CSS systems may find more impaired waters, but quicker, better and more frequent reporting so that the public health threats posed by the release of raw sewage into Great Lakes waters will at least be known and thus avoided.