Your resource for regulatory and legal updates
Shale Gas Development in U.S. Intriguing — and Controversial
10.10.2014

“[L]ow-cost energy provided primarily by shale gas production advances will almost certainly contribute to an investment boom across the US economy.”

On Sept. 24, 2014, I attended the Detroit Economic Club meeting at the Detroit Athletic Club. Hans Engel of BASF Corp. spoke about how the explosive growth of shale gas production in the United States has created very advantageous economic condition for companies that rely on hydrocarbons. He indicated that along with the benefits of shale gas, conditions in the U.S. present some risks, as well. His view from abroad may provide us some insight for future policy decisions regarding regulation, education and investments in infrastructure.

BASF is a global company that has 100 production sites in the United States, which represents 20 percent of the company’s activities. A full one-third of the raw materials BASF uses in its production are hydrocarbon based. Before the recent development of shale gas resources, natural gas prices had steadily risen in the United States, which imperiled continuing domestic operations by BASF and other hydrocarbon-dependent companies.

Beginning in 2000, natural gas prices in the United States rose steadily until 2008, when they plummeted due to the technological developments in extraction. Compared to the rest of the world (as seen on the chart below that was published in the Oil & Gas Journal), our natural gas prices are extremely cheap. Mr. Engel concluded that this cost differential provides the United States with an extreme advantage over other nations for companies that use natural gas as feedstock for their products. As a result, BASF has invested hundreds of millions of dollars in its U.S. operations and has plans to spend $1 billion this year on two major projects to take advantage of cheap natural gas prices. 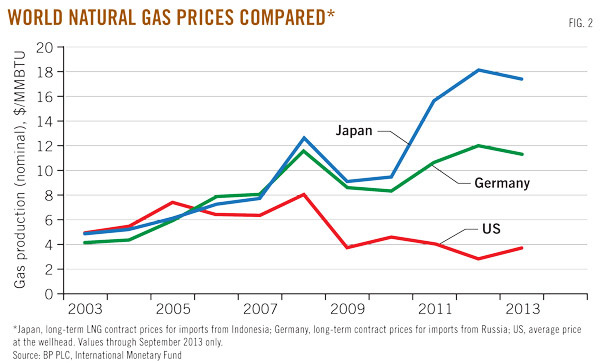 Mr. Engel also acknowledged certain risks that companies in the United States face that have the potential of retarding investment, even in the face of the competitive advantage of low natural gas prices:

Right now, the boom in development of shale gas provides the United States a significant advantage over other countries in the scramble to attract global companies that rely on hydrocarbons as feedstock for their products. As long as prices stay low here (and Mr. Engel expects that natural gas prices will rise to no more than $7/MMBTU), that advantage will remain. But, relying solely on low gas prices may not be enough, if we do not address other risks to growth that Mr. Engel described.

Saulius Mikalonis
Thanks for the kind words, Kirk. Mr. Engel said that the "regulatory environment" could result in some head winds for environment. But, it was my understanding that his focus was on stability, rather than any one thing that could be done or not done to retard investment. My read is that once a regulatory regime is entrenched and the business community knows it will remain that way, it can then plan and invest with whatever restrictions are in place. While it is possible that regulation could completely choke off development, we've seen nothing like that occurring since the boom started and the regulatory changes on the federal level (e.g., disclosure of fracking wastewater constituents, recapturing methane, etc.) do not approach absolute restrictions. There is some push back at the local level that I have written about (http://www.plunkettcooney.com/blogs-environmentalandenergylawblog,communities-attempt-fracking-limits), but that has thus far not created any slow down in development.
Kirk Heinze
A very interesting perspective from the energy producing sector, Saulius. With respect to the regulatory regime, did he make any comments on the likelihood of ever evolving environmental oversight? Keep the blogs coming; they are always well written and thought provoking. Kirk