Your resource for regulatory and legal updates
Traditional Utility Companies Lash Out at Green Energy Providers
07.30.2014

“I’d rather fight than switch.”

In an earlier blog post, I discussed the new concern traditional utilities have regarding the possible disruption of their business model due to disruptive green energy technologies. I mentioned that in the face of this growing threat, utilities had several options, including litigating to preserve their virtual monopoly on energy production, pointing to a recent decision out of an Iowa appeals court. The Iowa Supreme Court recently upheld the lower court’s decision, finding that a company providing solar power to a municipality under a power purchase agreement was not a utility subject to the jurisdiction of the Iowa Utilities Board.

The local utility argued that it had exclusive jurisdiction under Iowa law to provide power and that the solar company’s program, which operated completely on the municipality’s side of the meter, ran afoul of the exclusive jurisdiction of the utility. While the appropriate decision appears to be self-evident to some, it took 50-plus pages of opinion to explain the court’s reasoning, and two of the Iowa Supreme Court justices dissented. In fact, the opinion discusses several cases in other states where utilities have made similar claims, so it would appear that the war on distributed green energy is just heating up.

One can find an additional example of the blowback from traditional utilities in Iowa, too. According to a recent news report, Iowa had to surrender a $1 million grant for the promotion of solar energy after lobbying by Iowa electric utilities. Apparently, an Iowa utility group insisted on changes to the original proposal for the money, which was to be used to promote solar energy, to instead include references to the “limitations” of solar. As such a change was inconsistent with the purpose of the grant, Iowa lost the grant.

The concept of “limitations” is also present in a recent publication by the American Public Power Association titled “Solar Photovoltaic Power: Assessing Benefits and Costs.” The stated purpose of the publication is to provide information to assist policymakers in consideration of the merits of solar power. The authors posit that while solar clearly is a winner for some stakeholders, the financial benefits for others is not so clear. It also suggests that utilities might be in the best position to even out the benefits and costs among all users of power.

In the late part of the 19th and early part of the 20th centuries, a similar battle regarding preferred energy sources was occurring. At that time, the dominant source of lighting was coal gas, which had a long history of common usage, acceptance and infrastructure in place. That technology’s dominance was threatened starting around 1880 by Thomas Edison and electric lighting.

Gas companies initially discounted the efficacy and economy of the early versions of public lighting. For example, one letter writer not only worried about the economic fallout of the loss of “the cheap and abundant blessing of gas light” in England, but also dismissed the likelihood that electricity would supplant gas:

“That the electric light will eventually supersede gaslight is, in the absence of prophetic faculty, a mere matter of opinion. I am of the opinion that it never will, either for general or domestic lighting, ... The electric light has its uses, but they are in no way antagonistic to those of gas light.”

Edison worked tirelessly to improve the technology and lower its cost. How successful was he? Well, when was the last time you used a match to light your gas lamp to read by? 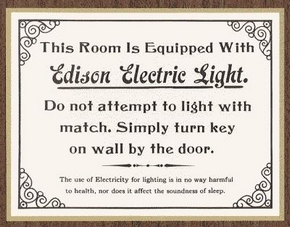 Looking through Thomas Edison’s scrapbook of news clippings and commentary from that time, one can trace the gas companies' scoffing at the new technology to its ultimate success and acceptance.

That is not to say that electric utilities are on their way out to be replaced by solar panels on every roof. Instead, the current business model for utilities may need to change so that they can take advantage of distributed energy, rather than find ways to block its adoption. And this is not just my opinion, as some utilities already are considering what they need to do to harness the potential of distributed energy.

At a recent conference by the Electric Power Research Institute (EPRI), a Duke Energy representative acknowledged the challenge of distributed energy and suggested that utilities would need a new business model that stressed incorporating distributed energy and developing interactive grid technologies to its customers. In addition to providing power, the utility also would act as a broker and conduit to disperse energy from multiple sources to its customers.

There likely is not one solution. I do think, however, that setting up roadblocks to the proliferation of new energy technologies is counterproductive. If there is any doubt about where we are headed, EPRI’s Arshad Monsoor observed that it took 20 years for California to develop one gigawatt of solar projects ... and just one year to double that amount.