Risk management resources and insights
Appellate Court Rules... You’ve Got (To Get) Mail
10.22.2014

A recent Michigan Court of Appeals decision held that retrieving mail is an “extenuating circumstance” that leaves one “with no choice but to” confront the risk posed by any hazard blocking access to it. 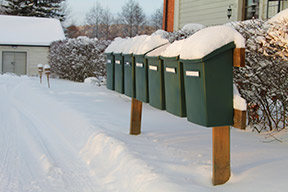 The defendants argued that the snow and ice presented an open and obvious danger with no special aspects such that they could not be liable for the plaintiff’s claims. The trial court disagreed and denied the defendants’ motion for summary disposition because it concluded that the hazard at issue was effectively unavoidable.

On appeal, the appellate court agreed with the defendants that the snow and ice was an open and obvious danger such that “an average user with ordinary intelligence acting under the same conditions as [plaintiff] would have discovered the snow and ice at issue and realized the risk presented on casual inspection.”

However, the court, in relying on Hoffner v Lanctoe, stated that “a premises possessor may be liable for injuries caused by wintry conditions, even though the wintry conditions are open and obvious, if the conditions have special aspects that make them unreasonably dangerous.” The court noted that a special aspect exists when a condition is effectively unavoidable, which the plaintiff can prove by showing that he or she “for all practical purposes, [was] required or compelled to confront [the] dangerous hazard.”

The court then went on to hold that “[b]ecause mail often includes communications and items of significant import, persons have a unique need to retrieve their mail that cannot be equated with a simple desire to avail oneself of the services or products offered by a particular business. Rather, the need to retrieve one’s mail is an ‘extenuating circumstance[]’ that leaves one ‘with no choice but to’ confront the risk posed by any hazard blocking access to the mail.”

Accordingly, the appellate court held that the allegedly dangerous condition encountered by the plaintiff was effectively unavoidable and affirmed the trial courts dismissal of the defendants’ motion for summary disposition.

Remarkably, this case appears to broaden the scope of what constitutes an “effectively unavoidable” hazard as previously illustrated by the Michigan Supreme Court in Lugo v Ameritech Corp, Inc.

In Lugo, the Supreme Court stated that a situation where the only exit from a building was covered with standing water would present an “effectively unavoidable” hazard. This is because anyone seeking to leave the building would be forced to encounter the hazard. If there was another way out, the hazard would not be deemed “effectively unavoidable.”

Notably, the Lugo court set a very high standard for determining when something constitutes an “effectively unavoidable” hazard and courts since Lugo have rarely found an allegedly dangerous condition that meets this standard. As such, the Spigner court’s decision may be ripe for an appeal to clarify this issue.

Of course, we will continue to monitor the Spigner case to see if it is appealed and accepted by the Michigan Supreme Court.